Press Release : The BBE Sonic Sweet bundle has been updated to version 4.0 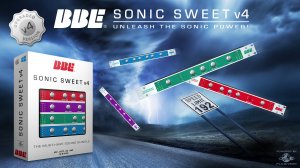 BBE Sound and Plugivery today proudly announce a major update to the legendary “Sonic Sweet” audio plug-ins bundle. It has been built from the ground up within a new framework that brings the classic sound of BBE Sound into the future.

When Audio Professionals talk about their “must-have” Equaliser, Neve usually is the first brand mentioned. Ask about their choice of a compressor and it might be an Urei 1176. When the subject is an enhancer/maximizer, “BBE Sound” is usually the answer. Throughout the world, there’s barely a studio, sound engineer or record producer that doesn’t own at least ONE version of BBE’s enhancer/maximizer tools.

BBE Sound products have been used on countless productions to give them more sparkle in the high end and a richer fatter sound in the low end without being “muddy”. BBE products have been copied over and over again but people stick to the BBE Sound trademark because they are quite simply the best sound tools in their category.

The BBE Sonic Sweet v4 plug-ins gives you exactly the same brightness, clarity, and fullness as the hardware modules with the added bonus of being fully automatizable. The “Sonic Sweet” bundle consists of four amazing plug-ins that bring the legendary BBE Sound into your productions :


Sonic Maximizer : Musicians and studio engineers for years have known that the D82 Sonic Maximizer is the best way to get that professional sound and extra sparkle that is so difficult to capture.

Harmonic Maximizer : The H82 Harmonic Maximizer increases presence and clarity. It restores natural brightness and adds deeper and extended low frequencies. It can be used in the studio on individual tracks or an entire mix, or live to enhance the sound of a P.A. system.

Mach 3 Bass : As a new addition to the “Sonic Sweet” lineup, Mach 3 Bass will take your low end to new sonic depths. Insert this plug-in on any type off bass instrument or signal where you need a big boost on the low end.

The Sonic Sweet v4 bundle has been completely rewritten using a new framework, “Powered by Plugivery” conserving every nuance of the same great tone as well as the ease of use you’d come to expect from BBE Sound products. The Sonic Sweet v4 bundle supports the following plug-in formats: AAX, AudioUnit, VST and now VST3 support for Mac and Windows computers.


Fully rewritten with our brand new “Powered by Plugivery” framework

Optimized DSP algorithms with up to 50% less CPU usage

Uninstaller for Mac in addition to Windows

The Sonic Sweet v4 bundle is available as a FREE update for all previous v3 owners from the following link :
http://download.plugivery.com/pvdl/?do=browse&dir=release∏=sonicsweet&bid=74

Throughout December, The Sonic Sweet v4 bundle will be available at the special introductory price of ONLY $99 (List $249) which is ONLY $25 per plug-in.

BBE Sound is a premier audio technology company dedicated to improving the quality of amplified sound for all people, from everyday consumers to music and sound professionals. BBE High Definition Sound technologies are found throughout the audio entertainment production spectrum; from the stage and studio, where world-renowned musicians insist upon using BBE professional audio processors, to consumer electronics manufacturers who implement BBE High Definition Sound technologies into their products so that they provide a more satisfying audio experience to their customers. Headquartered in California, BBE Sound, Inc. has been pioneering audio improvement technologies for professional and consumer applications since 1985.

Plugivery is a B2B (business to business) distribution service whose purpose is to introduce audio software products into hundreds of music stores all around the world carefully considering every need of a truly professional distribution service based on electronic delivery. The name Plugivery comes from the combination of the words "Plug-in" and "Delivery".
Press Information